“Very few actors bring to the table the intensity, commitment and passion for the work that Matt does. Not only does he make my job easier as a director but in turn also challenges me to go beyond my capabilities to get the best performance out of me. It’s the difference between a job well done and an amazing performance, something which Matt delivers every night” - Joe Rosario, Director

"de Rogatis is cracklin' good in the titular role!" - CurtainUp

"The versatile de Rogatis is up to the challenge. He gives us a virile, masculine Hamlet...The sheer physicality makes for a show that will remain with the audience members long after the play has ended." - The Huffington Post

"A gifted actor and immensely talented, de Rogatis shows frightening coldness...a riveting production that will have you on the edge of your seat!" - Theater Is Easy

"A fantastic job...The Collector is a psychological thriller that will make your skin crawl!" - Plays To See

"Masterful...the performance was other worldly. In the top 10 of my life all time." Arts Independent

"A show like Lone Star is the reason we go to the theater...superb direction...three remarkable actors...Matt de Rogatis masters the challenging part of Roy." - Broadway World

"A roaring revival!...Mr. de Rogatis vividly conveys the character’s despair and hopelessness with his imposing presence and perfect twang. Pacing restlessly, howling like a coyote and gazing up at the stars are among the striking facets of  de Rogatis’ magnetic performance. " - Darryl Reilly, TheaterScene (Top 10 of 2017)

"...suffering expressed vividly by Matt de Rogatis...invest the time in this wonderful and worthwhile play." - Ron Mwangaguhunga, The Huffington Post

"An alcohol laced comedy!...de Rogatis' acting chops are on display throughout." - ReviewFix

"MUST SEE!...de Rogatis gives a level of realism and authenticity to his performance of Roy that makes this character absolutely unforgettable." - LocalTheatreNY

"gleefully neurotic...de Rogatis is perfection as that infamous villain..." - TheaterScene (Top 10 of 2018)

"As Richard III, Matt de Rogatis must carry the show...and he does." - Dan Stahl, TheaterMania

"...very effective in the part...the acting is so wonderful." - Peter Filichia, Broadway Radio

"...wields Richard's manufactured charm like a dagger.' Off Off Online

"A stirring highlight is the matchup between Richard and Queen Elizabeth." - Broadway World

"Matt de Rogatis' Richard III scales the heights and plumbs the depths of the part with skill, emotional power and villainous delight...A real Richard who is spinning out of control." - ShowScore

"Matt de Rogatis' occasionally youthful, occasionally infantile, always impulsive Richard brought rich resources of interpretation and expression to the role. He was able to sustain all the variety occasioned by his character's unhingedness without any unconvincing step." - New York Arts

"The stormy match between Richard and Queen Elizabeth is the highpoint of the production...brilliant work..." - Hi Drama

"Matt de Rogatis, as Richard III, presented a boyish millennial with a brutal temper tantrum trigger. The iambic pentameter sat well in his mouth as he easily conveyed meaning in every scene. de Rogatis has a strong presence on stage and has a few truly exceptional moments." - Stage Biz

"This is the Glass Menagerie of my dreams!" - Joel Benjamin, TheaterScene

"de Rogatis delivers the most surprising performance of the evening. He eschews the typical portrayal of Tom as Tennessee...it's a smart angle on Tom and one I've never seen before." - Zachary Stewart, TheaterMania (Critics Pick)

"The show is respectful and hits its marks." - Elizabeth Vincentelli, The New Yorker

"The Glass Menagerie was haunting in its beauty and not to be missed." - Broadway World

"bold, powerful...it's grim, haunting take is a must see!" - Mark Rifkin, This Week in New York

"Matt de Rogatis as Tom is an animated narrator who takes chances with the cadences of his soliloquies..." - Off Off Online

"In the hands of Matt de Rogatis, Tom Wingfield’s opening narration and his closing monologue, both difficult to put across, were crystal clear and free from affect.  He made it believable that the ensuing play was a “memory play” and, with his deeply moving delivery of the poetic ending that he was infinitely destroyed by the memory of his sister." - Joel Benjamin, TheaterScene/Outer Critics Circle

"Matt De Rogatis’s Tom is virile and rangy, with close cropped hair and the fevered look of a man who can no longer quiet the inner voices that urge him to break away." - New York Theater Reviews

"de Rogatis sets the tone for the production in Tom's opening monologue, and he adeptly realizes Tom's mixture of rage, love, frustration, and affection all the way through his appropriately haunted delivery of the monologues that bookend the play." - Thinking Theater

"Each time de Rogatis, playing Tom Wingfield, would flick his cigarette free of ash, you could see the nervousness and aggravation in his hand, a true portrayal of a man who’d rather be dead than live another day in his current life." - Review Fix

As it appears in the published book, I'm In The Theater, Darling...Dispatches From The Theatrical War Front: 1977 - 2017 by Robert Liebowitz

"Every so often an actor appears out of nowhere, making his or her leap from the program onto the boards, and it rejuvenates one's soul, and awakens their sensibilities.
That happened again, tonight.
Matt de Rogatis plays the title role in Hamlet, and while I don't care for the play at all (I know, I know),
Mr.  de Rogatis shines, and leaves the rest of the play behind.
He is not a one hit wonder, either. In The Collector, a much better play, he mesmerizes as a pathetic kidnapper. Later on, in a completely different role in Lone Star, he again leads the charge as a Vietnam Vet having difficulty with the changed world he has returned to.
I am constantly reminded of Mr. Meisner's quote about the tightrope, because, according to my tally, thousands of actors and actresses have fallen to their death. Mr. de Rogatis, however, has made it from stage right to stage left, seemingly effortlessly, many times over."

"(Tennessee) Williams would probably love Matt de Rogatis' Brick"..."de Rogatis, tatted up and ab-tastic from his backlit shower entrance, compellingly finds the violence and identity crisis at Brick’s core in this contemporary staging"..."he is often somewhat of a handsome blank slate"..."de Rogatis, who also produces, convincingly hints at a torrid inner life, congealed into an imposing physique but betrayed by the anguish he voices at the mention of his ambiguously close relationship with a male friend who died by suicide..." - Juan Ramirez, The New York Times

- Charles Wright, Off Off Online - Drama Desk nominator and co-President

"...super hot, eye candy no matter what your orientation..." - Mark Rifkin, This Week in New York

"Matt de Rogatis gives a brilliant performance as Brick. He’s physically right for a former athlete still in good shape. He is able to convey a tense sense of interiority and is fully convincing as a drinker hoping to achieve the “click” when he has had enough to feel comfortable with himself. The production belongs to Brick. Mr. de Rogatis was, in every way, the star of this production...He carries the weight of this play on his beautiful back, a broken hero for the ages." - Mark Savitt and William J. Cataldi, Hi! Drama

"de Rogatis is excellent in the physically and emotionally complex role, battling through his demons toward an inebriated surrender in his wife’s arms." - Stanford Friedman, Front Row Center - Drama Desk nominator

"The role of boozy, passive Brick is a trap for actors who all too often fade into the woodwork. Matt de Rogatis finds fresh nuances in the character, investing him with a coiled tension that adds an extra note of danger to these marital skirmishes. The signs are subtle but unmistakable: Note how, during one of Maggie's tirades, he nervously drums his fingers against a tumbler. Listen for the catch in his voice when the conversation veers toward forbidden territory. And, when forced to admit his part in the death of his best friend Skipper, his fury leaves him rattled to his core. This Brick is sitting on an arsenal of unacceptable emotions; bourbon is the only thing standing between him and an unacceptable, annihilating truth."
David Barbour, Lighting and Sound America - Drama Desk co-President

"...superb...Le Blanc and de Rogatis were sensational as father and son in Act II, where their scenes really tugged at the heartstrings." - Markos Papadatos, Digital Journal

"de Rogatis makes a hunky, perfectly chiseled tattooed Brick...also is the most menacing Brick I have seen...
de Rogatis does convey his inner demons by the way he moves his body. You can feel his mental anguish. And later in the play his encounter with his father is well played out on his part." - Joseph Cervelli, Theater Time

"Taking a shower is how we first encounter the salt and pepper crew-cutted, tatted and chiseled, Matt de Rogatis’s Brick. This sensual evocation of mature boyishness is complemented by Mr. de Rogatis’s expressive tenor voice and sensitive mien. de Rogatis totally embodies that disillusioned alcoholic anti-hero who hobbles around on a crutch while here wearing short pajamas. He veers from taciturn melancholy to explosive eloquence with command." - Darryl Reilly, TheaterScene - Drama Desk nominator

"de Rogatis’ layered and powerful performance brings a troubled depth to one of the show’s more taciturn characters, relying on subtle acting choices and expressions to evoke Brick’s emotional turmoil." 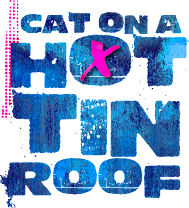